Cochin has some interesting traditions, buildings and Chinese fishing nets to offer.
Kochi (colonial name Cochin) is a vibrant city situated on the south-west coast of the Indian peninsula in the region of Kerala. It has had strategic importance over the centuries and is also referred to as the Gateway to Kerala.
The Arabs, British, Chinese, Dutch, and Portuguese have left indelible marks on the history and development of Cochin. Over the years, Cochin has emerged as the commercial and industrial capital of Kerala and is perhaps the second most important city on the west coast of India (after Mumbai/Bombay) It is situated close to the equator, the Arabian Sea and the Western Ghats.

When we visit the famous synagogue we find many touristic shops and merchants along the streets who want to sell a bit of all: old statues, magnets and postcards, cosmetics, flowers, plastic and stone elephants, Hindu God and Goddess in many variations and colored clothes and blankets. Tourism has definitely arrived at Kochi.
In these ‘sightseeing streets’ you get the impression to be in one of the touristic centers in South Europe. The atmosphere is different here. Less Indian style.
The streets are much cleaner than usual in India. Maybe it is a positive secondary effect of an advanced tourism? But this does not apply to other parts of this city. 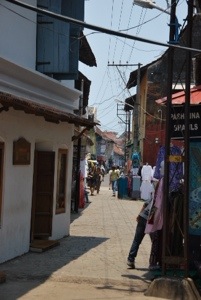 Fishing nets and waste
When we arrive at the famous and really attractive Chinese fishing nets, it is there again. The huge waste problem of India: plastic bottles, paper, food rests, waste, waste, waste …and overall this bad smell in a thousand variations.
We have seen many clean houses inside during our travel, we have seen laundries and washing men and women everywhere, simple, but clean houses where women start in the early morning to take care of, but in the public, on the streets, just a short distance away from home there is still a huge gap of environmental awareness. It simply not matters.

I am interested to know social entrepreneurs and NGOs working on this issue. Maybe there are some good ideas around on how to optimize the situation.
Maybe something will change if more environmental awareness comes up. Maybe … 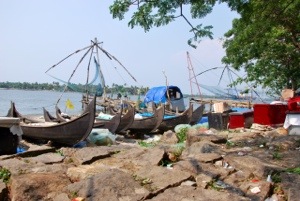