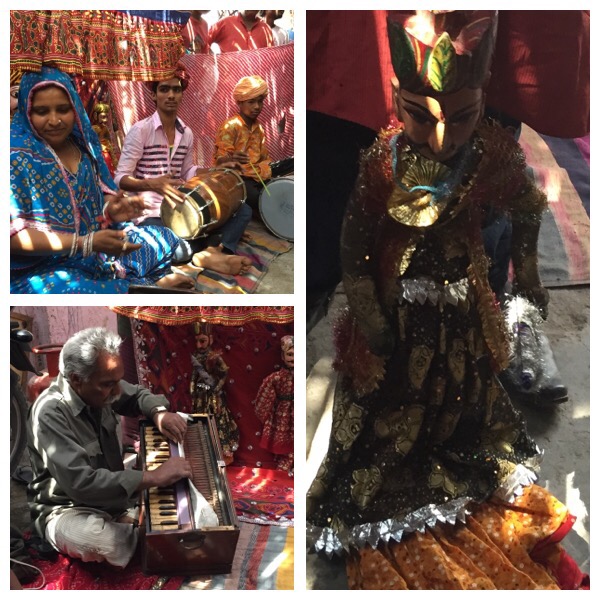 One day a court guardian asked the King to get some days off, because of his own marriage. But during those days a lot of bad things happened and he could not come back in time. The king got angry and sent some other guardians to search for him.  When they found him, they wanted to punish him and they were about to kill him because in that way they could increase their own influence to the king, too… But then a wise men came and made them understand that destroying others, egoism and killing is not the right way to a real good and happy life. Who shares and supports, gains more …. ” A nice story, presented by people living in the slums.

The puppet show in the middle of a slum, comes to an end. I sit in front of a small one room housing on the only chair that is available. It takes a while to remember where I am. I had watched a very unusual theatre play that had taken me to another world. Unusual sounds, fascinating people and musicians, and a flood of colours and impressions for all senses. It is a puppet world, the world of the puppet artists in the Kathputli Colony slum in Delhi. The family has arranged a puppet play and decorated all at its best. A real puppet stage with red curtains and , of course, a lot of puppets representing different caracters. The whole puppet player family with drums and accordion is there. They sing, dance, show me the puppets and one of them is carving a wooden small puppet. Private people and public institutions engage them often for local functions, such as weddings, anniversaries and inaugurations.

The young males show me also a body music song, a rythm driven song made just out of sounds produced by clapping feet, hands, tongue, fingers against their bodies. They are very concentrated. And they enjoy doing so. “We exercise every day.” One of them, maybe he is fifteen, sixteen years old, has been very successful and won a local artists talent competition. In a few weeks he will go to Mumbai and compete on a national level…

It is over. Back to reality

Inside the house, there are only a very few items on some shelves, some buckets, pots and cooking utensils, some textiles. It is a poor surrounding. A dirty, and wet, stony path leads from the main “slum road” to the house. Waste, bad smelling water, mud.

The Kathputli Colony is an almost 40 year old slum which houses families of puppeteers, magicians, folk singers, painters, dancers, acrobats, jugglers and storytellers etc. It is estimated that there are about 2800 families that live in this slum. These are very simple people largely from Rajasthan, Maharashtra, UP, Bihar and Gujarat and some other states who earn their livelihood through performing folk dances, traditional singing and magic, small handicraft businesses and also working as support to the adjoining affluent colonies.

There is a huge problem in these days. The local government want them to move to another place, more distant from the city. The huge newly constructed buildings near by are the reason. With the metro connection this area in Delhi has become an attractive one to live. For those who can pay much more. So, resettlement is needed. But the artists do not want to move. “We have started here, our parents, a thirty years ago, here on a cemetery ground, many years back. It is our home.”

“I have been in Germany, Belgium, France and some other countries, too, ” one of the elder man tells me and shows me proudly his passport.”One of my biggest dreams is to go again to Europe, to Hungary, Germany, Belgium or Spain and to present our puppet plays there, at some cultural occasion, some folk event. I would like to make come five, six people from my family, too. We could share our puppet shows, dance, sing. We don’t want to gain a lot, it is ok on how we live, but we need a sponsor for covering the travel costs and stay. Our life are our stories. We want to share them with the world.”

What, if they became changemakers themselves?

I wonder if these plays could not be used to raise more awareness on the slum itself. By these people living there. They are storytellers par excellence. During the play a lot of neighbors have come and listened. What if the plays were rewritten to rise awareness on healthcare, rights and education? These people could become changemakers. Not that much would be needed: Someone who works with them on some good content (maybe even the small Initiative called Art and Hope that organizes small social tours in the area) , some fund that helps to develop the content together with the puppet players. Raising the awareness on the potential that’s behind cultural education, even with the local government and in collaboration with them, some strategic support to promote the puppet sessions. Focusing eg on sanitation and hygiene issues. There is simply no awareness. But this is a topic for another post….

The resettlement issue – what’s happening with the slum

Interested to meet the slum artists? The Art and Hope tour could be a good starting point.