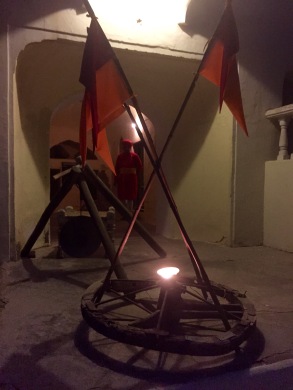 Coming back to my home town in Germany after seven weeks in India was not really characterized by a “big shock”. Although many friends have asked exactly that question during the last days: “Isn’t it a big difference and somehow strange to come back to a completely different, developed and modern world?” It is cold, it is rainy, the day light in winter times is definetely bad and everywhere is “Christmas” atmosphere here in Germany. I miss the colors – the western fashion style is much more “reduced”- , the mass of people in the cities seems to be much less this year (probably I compare it still with Mumbai city) and indeed – here we have a lot of space when we move, be it by car, be it just walking around), the streets and highways are a pleasure to use … But to tell the truth: There is no real shock, neither a real “finally back in the modern world feeling” nor the “Indian back-to-the-roots nostalgia”. It is everything just as expected and known.

But there is an issue that makes me think, something more hidden, more sophisticated. It is the question around the perception on what does “developed” and “modern world” mean. The more I am asked to talk about the differences of an emerging vs. a “developed world“, of a „rich and wellbeing country” and “modern and advanced style”  as contrast to a presumed perception of a country like India I wonder what these people who put the question really mean and maybe want to hear.

What and who is “developed”?

India: Should I tell them about the women to whom goats can mean that much, about desolated villages with completely depressed, unskilled people, the farmers’ suicides, about children work and sexual abuse? Is this what they expect me to tell and to confirm? The poverty – visible and touchable in so many parts of this large country that has so many different languages, religions, people, cultures… I mean we hear that much about the problems and poor people when we talk about India and other similar “emerging countries”…. Yes, no doubt, they exist. And there is a lot to do, to develop. There is crime, hunger, injustice, missing infrastructures, no access to the basics of a human life . Well, I could mention also the incredible kindness and hospitality I experienced there. About people who really took care that my stay in India was as pleasant as possible. About invitations, meals and gifts from people who had nothing themselves…

Or should I rather tell them about the Indian cities where you find malls that are at least as modern as ours here in Europe  and where you can find all known brands, too? About the middle-class Indians in Bangalore, living in these huge skyscrapers with own swimming pool, fitness center, exhibitions booths and vendors in front of the house door? Should I mention the students in the famous universities sharing their travel experiences to Europe, the private clinics where some of the best doctors worldwide are working? Or about rich Indians who prefer doing their Christmas shopping – or in case they are part of another religion – seasonal shopping in the most western way? This means to experience the shopping event feeling, including some coffee at Starbucks, a nice pizza in one of the food chains…. Ah, you will say, those rich corrupted Indians,  why do they not care that much about the others, the poor – those outside, living on the streets, malnourished, with just a few personal things, maybe a second cloth to wear, but no bed, not picture at the wall, no electricity (or if so, with  a lot of power cuts), no modern technology (except the TV, offered by the government)  in their huts and a low access to education and skills which they would need to be able to get access to better jobs? Those are their people, their neighbors… how can they behave in such a way and just ignore? Does the government not help?

So, does the development status include engagement on a personal level, is this an indicator how developed a society is? Or is it rather the personal development that defines a country as ‘developed’? My own well-being? My house, my car, my travels? Is it the general technical or economic development of a country or also the social development and environmental development? If so, who is responsible for it and where we are here in the modern world? Are we “developed” here in Europe? On a scale from 0 to 10 – where would you tick? Developed in which direction?And where do we develop towards?

If you ask me again, if I was shocked about my experiences in India or the big shock coming back, I have to admit: Yes, I was. Because I’m confused about the significance of development. What is really the meaning of “being developed”? What do we mean when we talk about developing others? And what is about our development?
I was shocked when I heard about the last weeks migrants discussions and movements on the streets, the big discussions how to live with the migration wave…; I just scanned the newspapers’ headlines and I wondered if the Christmas specials on TV are really important, how many headlines are positive, how many are negative – and how many out of the negative ones are referring to our own country and how many to other countries. Do we need to make sure how developed we are just underlining the problems of others?
Some young Indians want to be like us, like the developed countries, the more western, the better it is…
Do not get me wrong, I appreciate how we live here in Germany, and I love all the luxury we have here, too. I am fully aware that we live on an island of well-being and at the same time we have a huge need to develop, as well. We have a lot of poor people, too. Poverty in terms of having no homes, no money, even no food. And poverty of emotions, just thinking how many of us feel lonely and depressed, where family structures have dissolved and everyone thinks it is the most important think to become happy on his/her own…so-called self-realization.

Does development at the end lead to egoism and from “Gemeinwohl (common wealth)” to “Mein Wohl (my wealth)”? And if so, is it then really a goal to develop?

Well, at the moment we are deeply involved in finding the right Christmas gifts and checking if the latest iPhone or Samsung mobile is the better choice for the partner or kids. Mediamarkt and Co will have a lot to do in the next days – the run for changing gifts and the voucher sales that will start from tomorrow onwards. The delusion at the Christmas tree when the expectations are not fulfilled hopefully will have calmed down already – a little bit, although the toy had the wrong color, the handbag was too small and pullover no. 30 was not the desired one…

But then, then let’s spend some time together and find out how we can make the world a little bit better! And develop something that is sustainable, fair and – most of all – a benefit to all of us. There are many ways where we can start.

Still looking for some fund: Just have a look at: www.betterplace.org/p23461 – thanks!