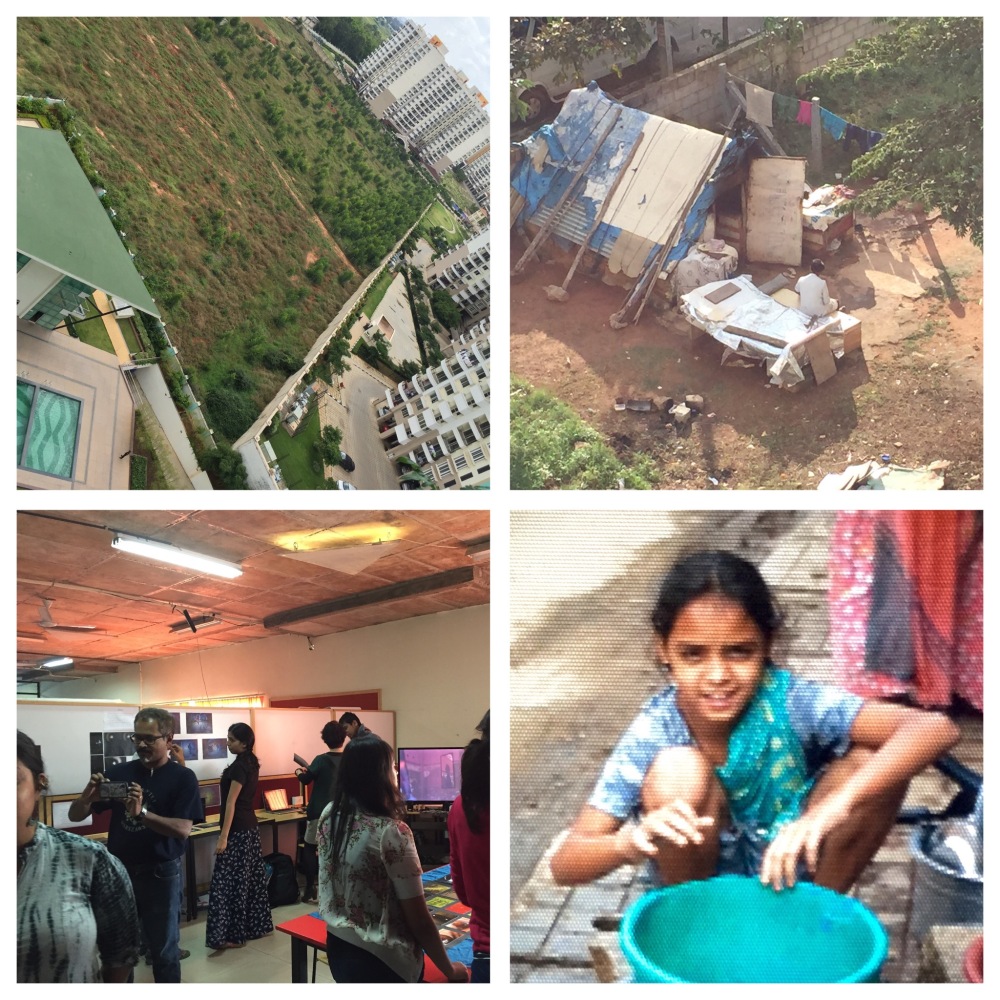 I can’t get used to it: extreme poverty  and  awealthy up to  rich middle class staying together as if they were friends. Strange friends: one of them has got everything and the other not even the basics for a human living. You may find this contrast everywhere in India. But due to the incredible economic development in Bangalore if the last decade it might be even more eye-catching than in other places.

In the outer areas of the city a big building boom is ongoing. ACC park, Little Venice … (Here even Venice water channels, lighted in the evening, imitate an Italian flair) . Five, six high-raise buildings form one park. Welcome to all who can afford: Huge garages for any kind of vehicle, swimming pools, modernest elevators, house service and fitness center… all inclusive. Even specific sales activities inside take place, all located behind the safety gates that surround these buildings. When I visit a friend living in one of these parks I am blended. A large apartment with four rooms, balcony, nice interiors, all kind of household items. No power cuts and perfect Internet connection. She lives on the top floor and enjoys a fantastic view on the city, and large green areas. Even the noise of the city is far away … Hyundai has put some new cars in front of the houses, a kind of exposition booth and promotional activity for all people living here. .. People can buy a new car – directly onsite. A lot of people have a lot of money … Today, nearly 9 million people stay at Bangalore, the ‘Silicon valley’ of India. Some of the best schools of India such as the design school Shrikta and many international companies are present. When you enter one of those schools, Apple computers are everywhere, students from rich families, well educated, large spaces , nicely shaped, overall glass constructions and modern style – a nice location for students. The middle and upper class is dominant, everywhere in the city. Apparently, the city offers all to conduct a good life. Apparently.

Only a few steps away – just looking out of the window – people live in small sheet barracks, no toilet, and a washing option behind some plastic curtains fixed on two trees. Children sit close to the noisy streets and play. Waste everywhere. It smells badly. On the other site a tailor factory where many people work day and night – probably for a few rupees per day…In the evening the workers go home to their huts where they sit on the floor, some even miss doors or put just some planks in front of the entry. The poorest sit there in the dark, four, five around an open fire. No bed, no table, some washed clothes on the roof or hanging on a tree around. They wait for a new day to come … When they will spend another day as construction worker, Ricksha drivers or just taking any kind of activity for a few rupees Bengaluru, how the city is officially called, is the fourth-largest metropolitan area in India. Located in southern India on the Deccan Plateau, it is the capital of the southern Indian state of Karnataka. Located at a height of over 900 m (3,000 ft) above sea level, Bangalore has doubled in the last 10 years: If it is tragic, fascinating, irritating – however you may call it, it remains a fact: Bangalore is the Indian city ‘par excellence’ where people live site on site, but in two different worlds. And no bridge in between.