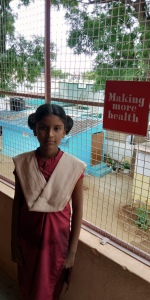 In one of the schools in South India we run together with our local NGO partner (Karl Kübel institute for development education) and a social entrepreneur from our network a large hygiene program. During one of the last visits we had a conversation about various topics, among them a very simple to solve but risky one:

“We already make sure that we put the elderly students at the first floor class rooms only, but still it’s a danger that one day a student will fall down.We are very afraid because the walls are simply too low. Just come and see…”, the head teacher told us.

The school building has two levels and the second one has a large open corridor in front. Indeed, when we stood there the problem became obvious. The height of the outer corridor wall was much too low. The students tented to sit on it and even a small push among the children could have let to a big incident.

Heightening the wall or putting a grid

The solution? A real simple one. We decided to put a grid in front.

Sometimes we need not the big money, the big projects and decision rounds to make more health happen.

Sometimes it’s just the small idea and the willingness of a few people to solve issues. Issues that could cause big health issues. Missing safety awareness and safety measurements are a big issue in the people’s life – all over the world , and particularly in the poor regions. We should care also about prevention in this sense, don’t you think so?